Squid are marine mollusks, They belong to cephalopods decapods. As testified by the categories grouping, they have 10 apron (tentacles) on the head, around the mouth. the 2 of them are longer than the other, and all have suckers. Squid have no skeleton, except a transparent and flexible limestone formation (pen – pen).

The squid is especially popular in some kitchens, particularly in Europe, China and Korea. Besides the pen, the eyes, offal and muzzle, all the rest are edible, even the bag with the ink very often used in cooking.

cooked with too many ways, while in our country is very dear fried calamari, stuffed, grilled, cooked in various ways. It is necessary to Lenten table, Combined with fasting and taverns by the sea!

Squid cleaned as follows: pull the head from the body. Together with the head will go out and offal. If we remove the giblets bag with ink and keep the, while a knife cut his head and throw away the rest offal. We make carefully a small crack between the eyes and remove (if not careful and break, pops ink and dirty). Also among the tentacles remove the muzzle is hard. From inside the body remove the pen (It starts from the body part having a small peak and ends at the other end, the fins) and whatever remains of the viscera may have been left inside. And also remove the outer membrane covering squid. Wash bodies and tentacles and let drain.

Here, in this issue, I write about the most …classical Greek way of cooking squid snack summer, with a big secret to soft and well cooked squid, But just follow below links for all other recipes.

A secret for very soft squid: 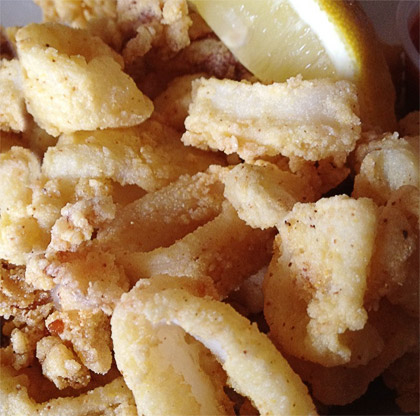 The classic recipe for SQUID, but with marinade that makes it too soft!

Salt, white pepper:according to your preferences

1. Peel the kiwis and mash. Mix with squid, put them in a bowl (not mineral), the cover and refrigerate for 20 minutes. Remove from the refrigerator, wash well to leave the Kiwi and dry. (kiwi fruit contain a substance that softens the proteins. But do not let it marinate over 20 – 30 minutes)

2. Mix the flour with salt and pepper and wrap lots of squid. Shake to drop off excess flour from the squid.

3. Heat plenty of oil in a pan, burn well and fry the squid few – little about 3 – 4 minutes. Take them out with a slotted spoon to paper towels to drain excess oil. Continue until you run out of squid.

The most important thing when cooking squid, It is the cooking time: They must be cooked at a very high heat for a short time. Cooking them must not exceed 4 – 5 minutes. For this time remain tender, gently, then harden and must be cooked over half an hour to xanamalakosoun. That’ it can fry a few – few in plenty of hot oil and they cook on the grill to make sure the fire is possible and not to cook for more than 2 minutes on each side.